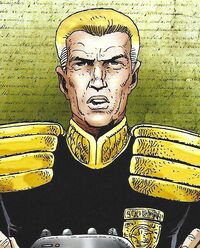 Judge Clarence Goodman is a character from the 2000 AD strip Judge Dredd. Although he wasn't the first Chief Judge of Mega-City One, he was the first one encountered by readers, and débuted in the same prog as Judge Dredd (although in the early episodes he was called 'Grand Judge'). Goodman became Chief Judge in 2057 AD. It was he who, in 2070 AD, announced Mega-City One's independence from the USA, as shown in the story Origins. He also gave Morton Judd permission to make clones of Eustace Fargo, the 'father of justice', resulting in the creation of Dredd and his clone brother Rico.

In the course of the strip Chief Judge Goodman fought in the 'Robot War' against Call-Me-Kenneth and granted Walter the Wobot his freedom. He also awarded Judge Giant, Snr. his full eagle (the insignia of a cadet who has achieved full Judge status) in a special ceremony in the Grand Hall of Justice.

Goodman was a competent Chief Judge who was willing to use unorthodox methods if they got results. For example, he once held a fake funeral for Judge Dredd as part of an operation to capture the lawbreaking Judge Gibson. He was also a fair-minded man who decided to let Judge Plaski off with a reprimand when he broke the Judges' rules by having sex with a citizen.

After 43 years in office, in 2100 AD Goodman was stabbed by mysterious masked men as he was signing autographs for children outside the clinic where he'd just completed his monthly rejuvenation treatment. Dredd raced to the scene and was there in time to hear the Chief Judge's dying words. Goodman managed to press a button from an SJS uniform into Dredd's hand before he died, alerting Dredd to the fact that he had been assassinated by the SJS so that their leader, Deputy Chief Judge Caligula, could assume control of Mega-City One.

Retrieved from "https://britishcomics.fandom.com/wiki/Judge_Clarence_Goodman?oldid=89919"
Community content is available under CC-BY-SA unless otherwise noted.