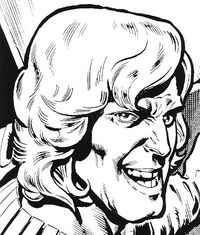 Judge Caligula (known as 'Judge Cal') is a villain from the 2000 AD strip Judge Dredd. He was Deputy Chief Judge and head of the Special Judicial Squad, the branch of Justice Department which judged the Judges in Mega-City One. Cal's voracious hunger for power led him to turn the SJS into his own private army, which he used (disguised as criminals) to assassinate Chief Judge Goodman. He also used the daily crime briefing tapes, which it was his job to prepare, to hypnotise all of the Judges into obeying him. The only Judges not affected were the tutors from the Academy of Law, Judge Giant (who was on a month's leave) and Judge Dredd (who was undertaking the mission detailed in the Cursed Earth story).

With Goodman dead and Dredd fighting for his life after an SJS sniper had shot him in the head, Cal was elected Chief Judge, and began a reign of terror which allowed his previously unsuspected insanity to bloom. He appointed his pet goldfish as his Deputy Chief Judge, brought in vicious alien mercenaries, the Kleggs, to act as his enforcers, and at one point began executing the entire population in alphabetical order — much to the horror of citizen Aaron A. Aardvark. The executions were only halted when Judge Fish died and the superstitious Cal took it as an omen, unaware that one of his own Judges had been instructed by Dredd to kill the goldfish because he knew how Cal would react. He also ordered one of his Judges, Judge Quincy, to carry out all his duties while wearing only his boxer shorts, as a punishment for being incorrectly dressed. (The Judge had had a button torn from his SJS uniform while assassinating Goodman, which the dying Goodman had passed on to Dredd.) Another, Judge Cox, was instructed to kill himself as a test of his love for Cal.

When the unhappy citizens tried to leave the city for the Cursed Earth, Cal used his Kleggs to violently force them to remain, as it would have been no fun to rule over an empty city. He then drafted all citizens, prisoners and robots — including Walter the Wobot — to build a huge concrete wall topped with gun emplacements around the city. (Years later, Lenny Zero would remember how his father died trying to escape from one of Cal's work gangs.) Dredd, Giant, Judge Griffin (principal of the Academy of Law), Judge Pepper (a tutor at the Academy) and a handful of others including Judge Fernandez and Judge Schmaltz formed an anti-Cal resistance and tried to sabotage the wall before it was completed, but were ultimately unsuccessful.

Cal became increasingly erratic — even by his standards — as his rule reached its hundredth day. He had his loyal ally Judge Slocum pickled in a huge jar of vinegar because he had dared to call him "crazy," and he claimed to be able to hear the voices of his predecessors as Chief Judge speaking to him. In the end Cal decided that the only way to keep the city in the state of 'perfection' which he deemed it had reached under his rule was to kill everybody with nerve gas. The control to release the nerve gas was at the top of the Statue of Judgement, where Cal would get the best view of the city's death.

Fortunately, before this could happen Cal was overthrown by Dredd and the resistance, with the help of a briefing tape made by Judge Pepper which reversed the Judges' brainwashing. He died at the hands of the former criminal Fergee, who jumped off the top of the Statue of Judgement with him. Cal was succeeded as Chief Judge by Judge Griffin, after Dredd declined to take up the rôle.

Years after Cal's death, an extradimensional version of him from an Earth where he had not been overthrown attempted to invade Mega-City One using dimension jump technology developed at Tech 21, assisted by his aide Judge Lackey and otherdimensional versions of Giant and several of Dredd's old foes including Fink Angel, Captain Skank and Rico Dredd. This Cal was eventually lost in the void between the various parallel realities.

It later emerged that Cal had had himself cloned before his death. Several of his clones ended up running a corporate state called Calcorp in the year 2220 AD, situated where California used to be. It mainly produced seaweed and fishmeal, suggesting that Judge Fish was also cloned. The Cal clones issued a time warrant for Judge Dredd's arrest, but fortunately the job was taken by the bounty hunter Johnny Alpha, an ally of Dredd's. He and his friend Middenface McNulty helped Dredd escape from the Cal clones and got the warrant cancelled.

Retrieved from "https://britishcomics.fandom.com/wiki/Judge_Caligula?oldid=137888"
Community content is available under CC-BY-SA unless otherwise noted.