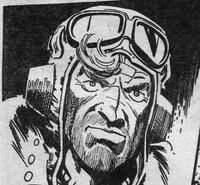 John Redburn, the eponymous protagonist of the comic strip Johnny Red, was a cadet unjustly discharged from the RAF during World War II for striking a training instructor. He stole a Hurricane in the heat of battle and piloted it into Russia where he ended up serving with the disenfranchised pilots of Falcon Squadron, equally unjustly accused of cowardice for surviving what should have been a suicidal rearguard action. Johnny fought alongside the Falcons from then on, all the time knowing that if he went home, he faced a court martial.