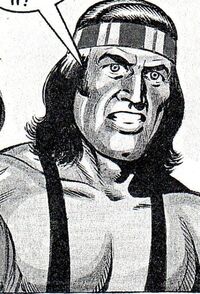 Johnny Cougar was a strip in the Tiger comic, which ran from 1963 until 1985. Its eponymous hero was a somewhat stereotypical Native American, a member of the Seminole tribe, who made his living as a professional wrestler, while skipping prepositions and articles in the best Tonto tradition. Over time, his matches became more and more outlandish and improbable, including one memorable occasion on which an unscrupulous demolition expert bet him that he wouldn't fight in a ring suspended between four factory chimneys! His frequent companion was swimmer Splash Gorton.

Stronger than the average human male.

Dumb as a bag of rocks.

One of Tiger's more successful characters, Johnny's strip lasted from 1962 until the title's cancellation in 1985.