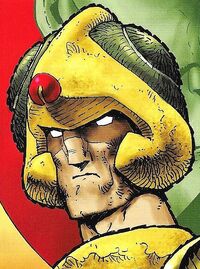 Johnny Alpha is the main character in the Starlord and 2000 AD comic strip Strontium Dog.

In the early days of the strip, Johny Alpha's story resembled that of an old western with Johnny Alpha and Wulf Sternhammer going from system to system. Their names dragged through the mud because of what they do for a living. As the story established itself Max Quirxx, Papa Por-Ka, Kansyr, The Jox, Billy Joe, Sadan, and the Brain were all encountered by our SD agents and were found wanting.

He was born John Kreelman in 2150 AD, a mutant warped in the womb by strontium-90 fallout from the nuclear war which had devastated much of Earth earlier that year. His father was Nelson Bunker Kreelman, an anti-mutant bigot highly placed in the British government who hid his son's true nature from the world while drafting laws which made mutants second-class citizens. He also locked his son in a cell for four years.

Rebelling against his father's evil, young John ran away to join the Mutant Army under the name 'Johnny Alpha' (because his eyes emitted alpha rays). At seventeen he was one of the leaders of the mutant uprising of 2167 (a.k.a. the first mutant war), along with Generals Clacton Fuzz, Evans the Fist, Studs Boyce, Middenface McNulty and The Torso from Newcastle. Following the uprising, Kreelman was deposed and fled Earth, but the mutant population were still largely confined to ghettos like Milton Keynes. The members of the Mutant Army were pardoned for their actions only on condition that they leave Earth forever, becoming galactic bounty hunters based on the orbiting space station known as the Doghouse: Search/Destroy Agents, harshly nicknamed 'Strontium Dogs'.

Johnny Alpha was for many years one of the most noted and grudgingly respected of the Strontium Dogs, a man of fierce principles who took on some of the most bizarre assignments. He also found and killed the mutant terrorist William Blood Moon, responsible for the indiscriminate slaughter of norms during the war. Johnny worked solo at first but later had a number of partners including the late Sniffer Martinez, the vampire woman Durham Red, Middenface McNulty and, most notably, the time-displaced Viking warrior Wulf Sternhammer (until his death). He was also frequently accompanied by a nervous alien, a Gronk from the planet Blas in the Gallego system, who acted as his and Wulf's medic.

Together, they undertook cases as diverse as the hunt for Nelson Kreelman, the so-called 'Schicklgruber Grab' (which involved travelling back in time to hunt down Adolf Hitler), and a trip to another dimension resembling the traditional Christian Hell in search of rogue SD Agent Fly's-Eyes Wagner. He also fought Kreelman again, in company with McNulty and several other SD Agents including The Torso, when Kreelman and his henchmen the Stix Brothers took over the Search/Destroy Agency. Eventually the Gronk disappeared from Johnny's life and Wulf was killed by Johnny's old foe Max Bubba, in revenge for his earlier imprisonment at their hands. Wulf's untimely death was one of the most traumatic events of Johnny's lives, causing him overwhelming grief and rage. He tried to deal with his emotions by hunting down and slaying Bubba, but discovered that this made no difference.

One of the jobs Johnny undertook in 2178 AD, after Wulf's death, involved neutralising the necromancer Sabbat. Since Sabbat had hidden in a time period before that occupied by Johnny — 2114 AD — this meant that Johnny had to travel back in time and team up with a reluctant Judge Dredd during the crisis thereafter known as Judgement Day.

When Nelson Kreelman's illegitimate son Lord Sagan attempted to implement his 'Final Solution', exiling all mutants to a hellish netherworld in another dimension, Johnny stopped him, seemingly at the cost of first his eyes and then his own life. His body was seemingly destroyed, but according to one subsequent account, the Gronk and the mutant Feral Jackson (who had been with Johnny at the end but had escaped back to Earth) later discovered him seemingly mystically resurrected by a cadre of alien necromancers who were torturing him in order to harness power from his suffering. The Gronk seemingly killed Johnny at his own request since he could not be freed.

A more recent account of the events following Sagan's Final Solution has thrown doubt on the accuracy of the previous one. Middenface McNulty and Johnny's old friend, reporter Precious Matson, discovered that Feral had lied about Johnny's body being destroyed in the other dimension and had in fact returned it to Earth. They also discovered, on locating Johnny's body, that he was apparently not truly dead but somehow held between life and death, and Middenface elected to trade his own life to the alien Stone Wizards in return for Johnny's. The wizards resurrected Johnny, with his powerful mutant eyes intact, but allowed Middenface to live regardless.

Johnny went on to uncover a government plot to sterilise Britain's mutants, implemented by evil aristocrat Sir Pelham Grenville. Revelation of this attempted genocide ignited the second mutant war, in which Johnny, Middenface and Evans the Fist fought valiantly against opponents like the Norm Brotherhood, the gang of American anti-mutant cannibal rednecks led by Dad Nabett. Johnny was aided, and occasionally hindered, by some sort of infant demon that had been living in his brain since his resurrection, but he finally managed to trick it into leaving him and then used a time bomb to maroon it in space.

During the war Johnny displayed an unusual callousness and brutality, even after evicting his unwelcome tenant. He went as far as ordering the execution of norm civilians, until Middenface convinced him that this would be a PR disaster and bring the Americans into the war on the norm side. Finally confessing that "My head's not right, Middenface. Haven't been right since you dug me up," Johnny went on a suicide mission, detonating a bomb in the parliament building where the architects of the genocide were being held prisoner.

Unfortunately for Johnny, who had badly wanted to die, he survived the explosion and was nursed back to health by the norms before being held in a top-security jail on an island for fourteen months. He was fed through a tube to stop him starving himself to death. Norm politicians then revealed that Johnny's friends Middenface, Evans the Fist and Kid Knee II had been on the same island the whole time. To ensure his friends' continued health and well-being (such as it was), Johnny was ordered to locate the missing despot Jim Jing Jong and thus avert a nuclear world war. (If his friends had been safely off-planet, he would have welcomed the prospect of a global holocaust.) Having located Jim Jing Jong in space, Johnny persuaded a sympathetic starship captain to take him to the mutant free world of Freedonia, home to his friend Precious Matson.

Johnny's eyes emit alpha rays which can enable him to see through solid matter and read minds in order to tell if someone is lying. (His eyes glow red when he uses his powers.) If Johnny tries really hard he can move small amounts of matter or telepathically influence someone's mind. His friendship with Wulf was so strong that he once subconsciously detected that Wulf was in danger and sent him a telepathic message to warn him. What made this even more impressive was that Johnny was in a coma at the time (2000 AD prog 197).

Johnny can slow his body's systems down to almost nothing, entering a death-like protective coma which has fooled people into leaving him for dead at least twice. This is, however, extremely risky for him. He is also very skilled at fighting with a las-whip, and is a strong swimmer.

Johnny's eyes can't see through matter if it is too dense, e.g. feet of solid rock or thick smoke.