John Ridgway (born 4th May 1940) is a comics artist who broke into comics in the early 1970s by drawing issues of D.C. Thomson's long-running war digest Commando on a part-time basis while working as a design engineer. He became a full-time comics artist in 1984, and has since worked on DC Thomson's Starblazer and more notably on IPC's sci-fi anthology 2000 AD and its spin-off publication the Judge Dredd Megazine, on series including Tharg's Future Shocks, Judge Dredd, The Dead Man, Junker, Vector 13, Missionary Man, Calhab Justice, Darkness Visible, Middenface McNulty, Tales from the Black Museum, Armitage, Candy and the Catchman and Summer Magic. For Warrior he has drawn The Spiral Path, The Liberators and Young Marvelman, amongst others.

Perhaps his most notable work for Marvel UK was the several strips he drew for Doctor Who Magazine, where he was the definitive Sixth Doctor artist (and co-creator of the fan favourite character Frobisher), but he also illustrated Transformers and Spider-Man and Zoids. Ridgway has worked for various other publishers including America's DC Comics.

Writer Nick Abadzis describes Ridgway as "a terrific artist" who "excels when he's given a fusion of very earthy elements and extreme, way-out fantasy. He can somehow meld the two and make them work together on a page. He brings a sort of truthfulness and veracity to everything he does." (Judge Dredd Megazine #363.) 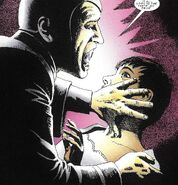 A vampire attacks Tegan in the 1995 Doctor Who Yearbook, by John Ridgway and Paul Vyse
Add a photo to this gallery
Retrieved from "https://britishcomics.fandom.com/wiki/John_Ridgway?oldid=89248"
Community content is available under CC-BY-SA unless otherwise noted.