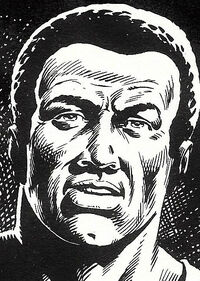 John 'Giant' Clay was a legendary Aeroball player, the leaders of first the Harlem Heroes and then the Harlem Hellcats. He was the only original member of the Hellcats to survive their last tournament, despite the best efforts of his arch foe Artie Gruber, who blamed Giant for his becoming a cyborg monster. Giant died in Brynner Hospice as an elderly citizen of Mega-City One, where both his son and grandson became Judges. His last act was to pass on his late son Judge Giant's badge to his grandson, Giant Jnr.

Giant has leadership skills and can throw an Aeroball at 120 miles per hour.

Giant was playing Aeroball in 2000 AD but was still alive in 2099 AD, when his son became a Judge. It would seem that he had access to some sort of life-extension technology (but not stookie glands, because those keep you looking young, and by 2099 AD he looked decrepit).

Retrieved from "https://britishcomics.fandom.com/wiki/John_%27Giant%27_Clay?oldid=137548"
Community content is available under CC-BY-SA unless otherwise noted.