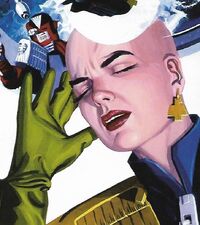 Psi-Judge Judy Janus is a character from the 2000 AD strip Judge Dredd who has also starred in her own strip, entitled Janus: Psi-Division. She first appeared in Judge Dredd on her nineteenth birthday in 2115 AD, helping Dredd deal with Mega-City One's latest crisis because Psi-Judge Anderson was on Mars. The day after her birthday she saved Dredd's life by locating him with her psi-powers when he was critically ill and about to be killed by some Cursed Earth mutants.

Janus popped up again at Christmas in 2116 AD, when she detected psychic activity in Fargo Square. (It turned out to be the Norse god Odin, but Dredd handled it.)

In 2117 AD Janus underwent an oneiric initiation ceremony and learned "the truth we in Psi-Division keep secret." The readers weren't told what it was, but Janus remarked that if the other Judges knew about it "they'd put us all in the cubes and throw away the key." (She didn't say whether she meant the psych-cubes, for mentally ill citizens, or the regular cubes, for criminals.)

By 2118 AD Janus was a confident and self-assured Psi-Judge, fully capable of dealing with minor annoyances such as malevolent poltergeists in the cadets' canteen. When her best friend was killed by a dead psi-cadet, Ashley, who had been in their year at the Academy of Law, Janus went on a journey to the afterlife to neutralise the threat. With the help of her dead friends, Bryce, Kilmer and Stryker, Janus annihilated Ashley and guided all the lost souls trapped in limbo to the light where they could find peace.

Annoyingly ditzy demeanour and speech patterns; hampered by cloyingly sentimental and illogical storylines; reacts to the death of her friends with as much shock and distress as if she'd accidentally dropped her munce-burger.