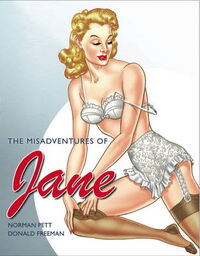 Jane Gay was a bright young thing from the 1930s whose life revolved around society, romance and her pet dachshund Fritz until the dawn of World War II, when she offered her services to the Army and became the driver and PA of "the Colonel." She had a series of often hair-raising adventures, most of which coincidentally involved her losing her clothes at various points. Her arch-foe was the languorous foreign floozy Lola Pagola, a Nazi spy. On 10th October 1959, the seemingly ageless Jane sailed off into the sunset with long-time boyfriend Georgie Porgie.

Jane's daughter, also called Jane, starred in the imaginatively titled Jane, Daughter of Jane from 1961-1963. It was drawn by Alfred Mazure.

Her granddaughter, predictably also called Jane, had a series of adventures in the 1980s, drawn by John M. Burns. Others who worked on various incarnations of the strip included writers Les Lilley and Tim Quinn.

Jane's strip was originally entitled Jane, the Diary of a Bright Young Thing.

Retrieved from "https://britishcomics.fandom.com/wiki/Jane?oldid=151717"
Community content is available under CC-BY-SA unless otherwise noted.