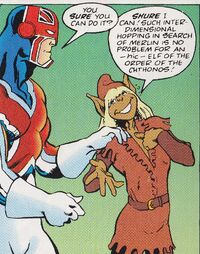 Jackdaw is a character from the Marvel UK strips The Black Knight and Captain Britain. An elf of the Order of Chthonos from Otherworld, he was assigned by the wizard Merlyn to assist Captain Britain. Despite his childish demeanour he is at least a thousand years old.

Jackdaw was first seen when he stowed away in a saddlebag on the Black Knight's winged horse Valinor, during the knight and Captain Britain's search for the tomb of King Arthur. The elf proved his worth by using his bow and arrows to fend off two hostile dragons sent by Necromon. (He hit one in the eye and it set fire to the other one, which perished. The first dragon realised that it was outclassed and fled.)

When Valinor landed on the island where Arthur was buried, Jackdaw used his psychic abilities to help the Black Knight defeat a giant stone monster guarding his tomb. He revealed that "even among elves I am gifted, sir knight... which is why Merlyn sent me with you!" Why Merlyn didn't tell the Black Knight and Captain Britain about him in the first place, instead of having him hide in a saddlebag, wasn't explained.

King Arthur was successfully resurrected and used his power to send Captain Britain 'home', accompanied by Jackdaw. The place where the pair actually ended up, however, was the dark and threatening parallel world known as Earth-238. When Captain Britain, weakened by a sonic attack which destroyed his concentration, was attacked by the Status Crew (government thugs), Jackdaw jumped in front of a bazooka to save his life. He was apparently annihilated, but was in fact rescued by Merlyn.

Returned to Captain Britain's side in a new costume, Jackdaw was promptly attacked by the Fury, Mad Jim Jaspers' hero-killing 'cybiote' (cyborg). He died in the Captain's arms while waiting for Merlyn to rescue him again.

Someone appearing to be Jackdaw resurrected was years later seen working for the murderous former hero Killpower during the Revolutionary War. His current status remains unclear.

Can attack with a 'psychic blast', or telepathically turn enemies into friends.

Frequent dimension-hopping may leave him tired and needing a rest before he can transfer again.

Originally carried a bow and arrows.

Jackdaw claims that he has "sworn never to lie." He frequently refers to himself in the third person.

Jackdaw fought in the Fomorian wars.