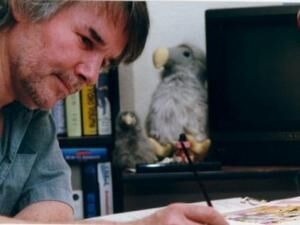 Ian Gibson (born 1946; a.k.a. Q. Twerk or Emberton) is a comics artist best known for his work on 2000 AD in the 1980s and since, particularly on the strips Judge Dredd; Robo-Hunter; Anderson, Psi-Division and The Ballad of Halo Jones. He also worked on less well-known series including Walter the Wobot; I Was a Teenage Tax Consultant; The Mind of Wolfie Smith; Tharg; The Amazing Maze Dumoir; Ro-Jaws' Robo-Tales; Project Overkill; Ace Trucking Co. and Banzai Battalion .

Gibson has worked for Marvel UK on Genghis Grimtoad, for Warrior on Big Ben, The Man With No Time for Crime, for Brown Watson on publications such as the Bionic Woman Annual, for American publishers DC Comics on Mister Miracle, Millennium and Green Lantern Corps, for Marvel Comics on X-Men Unlimited, for Dark Horse on Star Wars, for First Comics on Meta-4 and for Eclipse on Steed & Mrs Peel, amongst others.