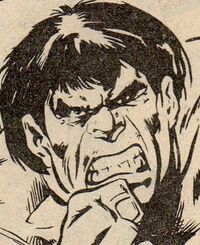 Caught in the blst of an exploding Gamma Bomb, Dr. Bruce Banner found himself transformed into a raging, green skinned powerhouse with the mind of a child every time he was under stress. Often a fugitive because of his condition, he has spent the years since trying to find a cure, along the way tackling numerous threats to humanity including Doctor Scarabeus, the misunderstood Susquatch, The Exterminator and the alien Quarrn.

Though an American character created for Marvel Comics in the USA by Stan Lee and Jack Kirby, the Hulk has actually had a long history of British originated stories. The earliest was published in the pages of Odhams weekly anthology Smash! (issue #38) in the late 1960s, and was basically an attempt to explain the disparity between the Hulk's intelligence in the very early US stories they had been reprinting and the later stories immediately following (In the original American comics, there was a several year break between these two runs, so the difference was not so noticeable). Later, in 1979, Marvel UK launched a new weekly Hulk Comic which featured British originated versions of several Marvel characters including the Black Knight, Ant Man and Nick Fury, with new Hulk strips drawn initially by Dave Gibbons and later by David Lloyd and John Bolton, amongst others, as the lead feature (writers included Paul Neary and Steve Parkhouse). The Hulk strips, which were nominally set in mainstream Marvel continuity but followed a formula closer to that of the then popular Incredible Hulk TV series, ran for the first several issues but appeared only intermittently afterwards, replaced by US reprints (some installments of the British strip were later reprinted in colour in the US in the back of the Avengers reprint title Marvel Super Action). There were also several UK originated Hulk strips (featuring the David Banner version of the character from the TV show, and thus totally separate from the regular continuity) featured in the 1980 and 1981 editions of the Incredible Hulk Annual (published in 1979 and 1980, respectively). Panini, who took over the licence to publish Marvel characters in Britain following the dissolution of Marvel UK, also ran some original Hulk stories in Marvel Heroes and Marvel Rampage. American Hulk stories have been reprinted in numerous British titles including Incredible Hulk, Mighty World of Marvel (the character's longest serving home in the UK), Smash!, Rampage, Spider-Man & Hulk Weekly and the Hulk Pocket Book.

Retrieved from "https://britishcomics.fandom.com/wiki/Hulk_(Bruce_Banner)?oldid=147150"
Community content is available under CC-BY-SA unless otherwise noted.