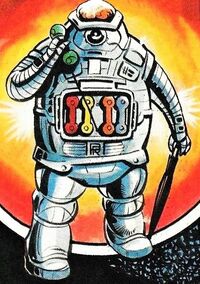 The Ro-Busters, ABC Warriors and Savage character Howard Quartz was originally a normal human, the brother of US President Dick Quartz. Howard was the CEO of Quartz Industries, who amongst their many other activities designed robots for the US military through their subsidiary Ro-Busters Inc. He created the original Mark I War Droids (forerunners to the ABC Warriors), which had to be scrapped because they were so incredibly gung-ho that they slaughtered friend, foe and civilian alike.

Quartz's biggest mistake was to anger Bill Savage by letting his robots kill a large number of civilians in London during an anti-US demonstration after the end of the Volgan occupation. Savage pretended to have forgiven Quartz but later messed with the controls of one of Quartz's own Hammerstein robots so that it beat Quartz into a bloody pulp. His body was totally wrecked, meaning that his brain had to be deposited in a robotic form to survive. He was thereafter referred to as 'Mr Ten Per Cent', because only 10% of him was human.

The cyborg Quartz later took a personal interest in the activities of his Ro-Busters Disaster Squad, composed of second-hand robots he'd bought cheap. They included Ro-Jaws and Hammerstein, with whom Quartz had an antagonistic relationship, and the psychotic bulldozer Mek-Quake, as well as the deranged Dr. Feeleygood.

When Ro-Busters became unprofitable, Quartz decided to destroy the robots as part of an insurance scam. A dozen of them, warned by Quartz's secretary and P.A. Miss Marilyn, escaped to the free robot world of Mekka, led by Ro-Jaws and Hammerstein. Quartz apparently survived for centuries, and eventually attempted to reclaim 'his' Warriors on Mars, re-recruiting Mek-Quake, who murdered the adopted son of the ABC Warrior Tubal Caine on his orders.

Robot who gets regular exercise.

Mek-Quake; "a variety of anti-personnel weapons" (according to prog 2065).

Retrieved from "https://britishcomics.fandom.com/wiki/Howard_Quartz?oldid=126754"
Community content is available under CC-BY-SA unless otherwise noted.