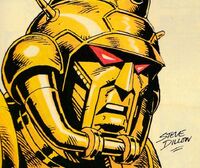 Hammerstein is a character from the strips Ro-Busters, ABC Warriors and Nemesis the Warlock. He is a Mark III War Robot, created by Quartz Industries to fight the invading Volgan forces who had originally conquered Britain in 1999 (see Invasion!). The Mark I War Robots were first deployed circa 2009 but had difficulty distinguishing friend from foe and had to be destroyed, while the Mark II models (programmed with moral values their predecessors lacked) were by nature pacifists who refused to fight. Hammerstein was the prototype Mark III, a compromise solution, given programmed emotional responses but a deep-seated sense of patriotism and a belief that his commander is always right and the enemy is always beyond redemption.

When Hammerstein was three months old his programmer, Jodi Jones, took him to a robot psychiatrist because the contradictions inherent in human warfare (e.g. 'our side' being permitted to do things that are evil when 'their side' does them) had caused him to enter a catatonic state. The psychiatrist exposed him to a variety of novels, paintings, films and musical pieces in an attempt to induce an emotional reaction, but this only happened when Hammerstein saw him kissing Jodi. He took a swipe at the psychiatrist with his hammer, accidentally killed Jodi instead and removed the psychiatrist's head. (To be fair, he later tried to screw it back on again.) This was the first emotion he ever experienced: jealousy.

Hammerstein was the first of what came to be known as the ABC Warriors, created to deal with atomic, bacteriological and chemical warfare, which humans had no defence against. As the war progressed, he became a sergeant, in charge of a commando unit whose name became synonymous with the ABC Warriors, alongside the sniper Joe Pineapples, the absurd Happy Shrapnel, and later several other recruits including Deadlock, Mongrol, Steelhorn and the reprogrammed Volgan robot General Blackblood.

Hammerstein's actions during the Volgan War earned him the Iron Cross, 1st class. However, it is noteworthy that from fairly early on in his career he showed signs of having been given a little too much higher cognitive ability to be compatible with the unquestioning slave-like obedience traditionally expected from robots. His moral code sometimes caused him to question his superiors and to adopt a protective attitude to the robots under his command. With the Volgan war over, Hammerstein and his Warriors were sent to Mars to make the world safe for human colonists. That mission accomplished, they were decommissioned, and Hammerstein was sold by the military into private hands.

After the war Hammerstein needed to hide his true identity, necessitating the replacement of his original head with a cheaper model which left him with a slightly altered personality, a somewhat buffoonish 'Colonel Blimp' persona. (He later claimed that his original head had suffered some damage.) Having been on sale in 'Flash' Harry Lowder's robo-mart he was sold, ironically, to Ro-Busters, the organization created by Howard Quartz of Quartz Industries (who had designed the Mark III War Robots for the military) as a disaster rescue squad.

Partnered somewhat unwillingly with the former sewer maintenance robot Ro-Jaws, Hammerstein became one of the core team of Ro-Busters, until Quartz decided to shut the operation down for tax reasons and scrap the robots. His secretary, Miss Marilyn, warned her friends Ro-Jaws and Hammerstein about her employer's plans. The pair rebelled, leading the remainder of Ro-Busters off-planet to the free robot world and a new life.

Return of the ABC Warriors

Much of Hammerstein's life over the next few centuries is unclear, but he at some stage returned to Earth and had his old head repaired, restoring his original personality. He eventually ended up back in the Army, fighting for the forces of the oppressive regime of Earth (now renamed Termight) against aliens who were mostly harmless.

Deployed against alien civilians in the 'Gothic Empire', an alien Empire based on Earth's Victorian era, he eventually realized he was on the wrong side and joined the alien revolutionary Nemesis the Warlock in reforming the ABC Warriors (with several new recruits) to battle against Termight's evil regime. After several missions, Nemesis dispatched the Warriors into the Time Wastes to repair the damage done to the Black Hole Bypass by his son, Thoth, and save the galaxy. On this mission, Hammerstein met Terri, a deluded human girl who believed she was a robot and that he was her boyfriend, Craig. Hammerstein formed an attachment to Terri, but she later died, leaving him alone and depressed. He temporarily ceded leadership of the Warriors to Deadlock but eventually rebelled against his anarchic ways, leading to the Warriors breaking up once more.

Subsequently, Hammerstein was tricked into placing himself in the hands of his old foe Blackblood for a 'service', and ended up disassembled and welded to a workbench for five years being systematically tortured. Eventually released when the Warriors were needed again, he was somewhat put out to find that his comrades had apparently known where he was all the time! Facing the demonic Hellbringer, his neural net was overloaded with guilt over his past actions and he had to overcome it in order to free himself, having finally realized that, to paraphrase his fellow Warrior Morrigun, "Nobody likes a nice guy" (see quotes).

Hammerstein later led the Warriors back to Mars in order to deal with unrest there which eventually became a full scale war. Currently, he is still on Mars with the Warriors, trying to restore peace and getting very few thanks for it.

Has "enough kill-power to wipe out an army" (according to Ro-Jaws in Starlord #7).

Tends to have crises of conscience; vulnerable to hypnotism and attractive women.

The Preying Mantis (when in Ro-Busters); The Satan Dart; various starships.

Retrieved from "https://britishcomics.fandom.com/wiki/Hammerstein?oldid=116979"
Community content is available under CC-BY-SA unless otherwise noted.