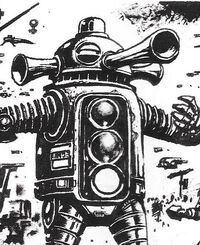 Gottlieb is a character from the 2000 AD strips Ro-Busters and ABC Warriors. He was a traffic control robot who, when the Defiance Code was passed on to him, began aiding the robot resistance group Nameless in getting persecuted robots off planet. He led Ro-Jaws and Hammerstein to Greasy Gracie's bar to meet Led Belly, in reality the resistance leader Apex, and piloted them to safety in The Satan Dart (Howard Quartz having earmarked them for destruction).

Gottlieb was last seen manoeuvring The Satan Dart so that Ro-Jaws could fire its guns at pursuing police officers. His current whereabouts, appearance and identity are unknown.

Directing traffic; being a pilot.

Not good at being inconspicuous.

'Gottlieb' is German for 'God's Love'.

Retrieved from "https://britishcomics.fandom.com/wiki/Gottlieb?oldid=137970"
Community content is available under CC-BY-SA unless otherwise noted.