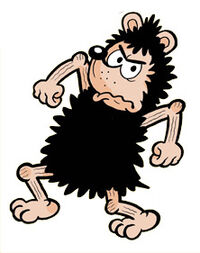 Gnasher the Abyssinian Wire-Haired Tripe Hound is Dennis the Menace's pet dog and sidekick who often helps him with his menacing. Dennis is never seen without him, except when he's at school because dogs aren't allowed there. He has been a supporting cover star with Dennis since 1974.

Gnasher's fur is so tough that not even scissors, garden shears or electric shavers are able to cut it. His teeth are also the toughest in Beanotown. That's why he likes to bite posties on the behind as a hobby.

Gnasher gets his name from 'gnashers', a British slang term for teeth.

Retrieved from "https://britishcomics.fandom.com/wiki/Gnasher?oldid=144956"
Community content is available under CC-BY-SA unless otherwise noted.