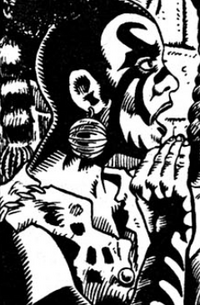 Giya is a character from the 2000 AD strip Sláine. She was a young tribal girl plucked from time by the Cythrons at an unknown date.

The group brought Giya along with them, feeling pity for her. Sadly she was with them for only a short amount of time before she was set upon by a giant rat that pulled her into a sewer tunnel where Giya was eaten alive. Poor girl escaped being eaten, only to be eaten.

It's not known what her actual name was, but due to her saying the word "giya" an awful lot, that's what Ukko and co. decided to name her.

Retrieved from "https://britishcomics.fandom.com/wiki/Giya?oldid=65160"
Community content is available under CC-BY-SA unless otherwise noted.