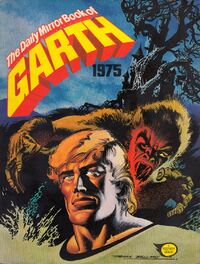 Washed up on a beach in the mid 1940's, the seemingly ageless Garth had no memory of who he was or where he came from. He nevertheless embarked on a series of adventures which lasted several decades and saw him bounced through time and space by a variety of methods. Along the way, he met his patron and true love, the goddess Astra, who to an extent guided his travels, as well as his close friend Professor Lumiere.

Retrieved from "https://britishcomics.fandom.com/wiki/Garth?oldid=96389"
Community content is available under CC-BY-SA unless otherwise noted.