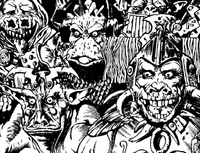 The Fomorians are antagonists from the 2000 AD strip Sláine. They were a species of Sea Demons led by Balor the Evil Eye. Following orders from the Lord Weird Slough Feg, the Fomorians ravaged Tír na nÓg killing or enslaving many of its inhabitants.

After several wars against the human tribe led by Sláine the Fomorians finally fled back into the waters with the death of Balor. Before they all left however, a high-caste Fomorian named Moloch raped and murdered Sláine's wife Niamh. This led to Sláine stepping down from his position of High King and hunting down Moloch.

Upon his return Sláine was horrified to see his tribe under attack by a new group of Fomorians named Golamhs, led by the audacious Lord Odacon. After many more battles Sláine left his tribe for good after placing them in the safety of Danu's domain. Lord Oadacon was slain and the last Fomorian invasion was put to an end.

Retrieved from "https://britishcomics.fandom.com/wiki/Fomorians?oldid=123134"
Community content is available under CC-BY-SA unless otherwise noted.