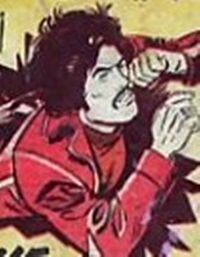 Fireball (whose real name was never revealed) was a British secret agent who operated in the 1970s, going up against villains such as Catriona Klangsburg (alias the Cat) while protecting Britain's interests. He was raised as the legal ward of Lord Peter Flint (the former World War II era superspy codenamed Warlord) after the deaths of his parents, and his "Uncle Pete" continued to be a help and inspiration to him in his adult career.

Retrieved from "https://britishcomics.fandom.com/wiki/Fireball?oldid=95953"
Community content is available under CC-BY-SA unless otherwise noted.