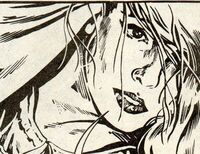 Fiona, an engineering student, was the daughter of the old astronomer McMurdo, and was staying with her father when he became caught up in the struggle of the Time Traveller named Ralf and the mysterious Kilgore Slaughter against Destruct Droids from the future. Fiona was supposed to travel into the past with Ralf while her father and Slaughter went into the future, but she never got to make the trip. She did, however, find love with Ralf.

Retrieved from "https://britishcomics.fandom.com/wiki/Fiona_McMurdo?oldid=103542"
Community content is available under CC-BY-SA unless otherwise noted.