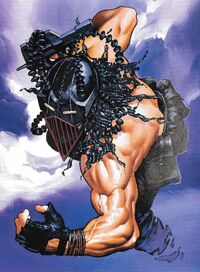 Finn is a 2000 AD strip starring a pagan warlock and eco-terrorist called Paul Finn. He fights big greedy businesses which damage the environment, evil aliens called Newts, and a dark god called Nosiron (whom he affectionately nicknames 'Frogspawn'). The Newts "believe they brought civilization to Earth many thousands of years ago when they separated humankind from nature. 21st Century humans like Finn, who believe modern society is unnatural, are to be eliminated!" But the Newts never succeed in eliminating Finn, because his coven and the powers it derives from the Goddess are too strong.

Finn was originally a supporting character in the Crisis strip Third World War, but he moved to 2000 AD and got his own strip when Crisis was cancelled. To make ends meet he works as a taxi driver in Plymouth.

Magical powers. Also has the ability to fly, be invulnerable, etc when he is equipped with the 'Tabula Rasa', a 'stone of power'.

The series of Finn were as follows:

According to Pat Mills, Finn was liked so much by the readers that "David Bishop told me it actually surpassed Sláine in popularity, which doesn’t surprise me at all. But he refused any more Finn stories, claiming that it was too similar to Sláine. Can’t have too much paganism, apparently."