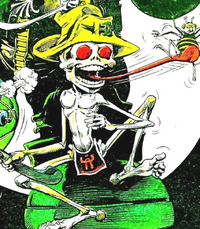 Feek is a Skeletoid, an alien resembling a humanoid skeleton. He served as the ship's engineer on the Speedo Ghost, flagship (and indeed, for a long time, only ship) of the Ace Trucking Co., an interstellar haulage company run by Ace Garp. Feek's mechanical skills were frequently the only thing that kept the ship and its computer, Ghost, from falling apart. Despite this, it seems that Ace didn't actually bother to pay him. At one point Feek complained that he had been without a salary for "one year, maybe five year!"

When Feek was swallowed by a gigantic flying monster on the planet Gordon his friends burst into floods of tears and held a moving memorial service for him, complete with eulogies and a wooden cross stuck in the ground. Feek was later discovered alive in the belly of the beast, where he'd made himself a cosy "grotto" complete with hammock.

Following Ace's apparent death, the surprisingly shrewd Feek took over the company with Ace's former first mate G.B.H (Dead) as his second in command and made it hugely successful, much to the surprise of Ace when he returned from a parallel universe some time later. Ace attempted to take control again but Feek and G.B.H declined to let him, on the fairly sensible grounds that they liked being rich and wanted to stay that way.

Feek's constant companion is Chiefy Pig-Rat, a sarcastic and piratical rodent which he keeps as a pet. Feek also had a wife, but they didn't get along. Ace and G.B.H. thoughtfully got rid of her for him by shutting her up in a packing crate and abandoning her on the space city of Astropolis. She didn't look very happy when she emerged.

Superb engineer (can make practically anything you need from two paperclips and a watch battery); savvy businessman.

Has a variety of interesting hats (or, as Ace calls them, 'gurney warmers'); normally carries a tool called a spanniard (looks like a pipe wrench).

When Feek was a child, he always wanted his mother to take him to Christmas Moon, a planetoid with a fountain that emits a "pure feeling of Christmassyness." Feek's mother didn't want to go, so she told him it was "a honey trap for selling kids into slavery." (2000 AD prog 2061.)

Retrieved from "https://britishcomics.fandom.com/wiki/Feek_the_Freak?oldid=160334"
Community content is available under CC-BY-SA unless otherwise noted.