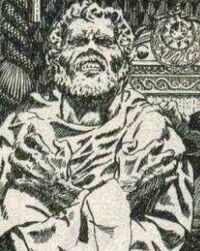 Father Shandor was a priest from Transylvania who was cast out by his order for using magic and ancient relics to combat demonic forces, something his superiors for some reason frowned upon (presumably, he should have just let the forces of the netherworld get on with it while he stuck to organising church jumble sales). He responded to this by hitching up his skirts and setting off to roam the world battling evils such as the demoness Jaramsheela.

Being holier than thou.

Shandor actually originated in a movie, the Hammer Studios classic Dracula, Prince of Darkness, played by Andrew Keir. Dez Skinn was impressed enough with him to give him his own strip in House of Hammer in 1977, and in 1982 he became a regular part of the line-up of Warrior magazine.

Retrieved from "https://britishcomics.fandom.com/wiki/Father_Shandor?oldid=84205"
Community content is available under CC-BY-SA unless otherwise noted.