Start a Wiki
Excalibur was an American Marvel Comics publication which was, nevertheless, originally heavily tied to Marvel UK's stable of characters, in particular Captain Britain (Brian Braddock), his partner Meggan and their various enemies and supporting characters such as Roma and Saturnyne. The Captain and Meggan were a part of a British based team which also included several American Marvel characters from the X-Men, including the American born Shadowcat (and her pet dragon Lockheed) and Phoenix II and the German born Nightcrawler. The original creative team were British artist Alan Davis (who had drawn Captain Britain for Marvel UK) and British born American writer Chris Claremont (the original creator of the Captain). Later issues of the series, however, following the departure of the original creators, downplayed the Marvel UK characters (even writing Captain Britain out altogether for a time, reinventing him as the bizarre Britannic and eventually de-powering him) and the book's often semi-comedic tone, and strengthened the title's connections with the X-Men universe (bringing in new characters like X-Man Colossus along the way), effectively destroying its original identity. The series, which began with a cardboard covered Special Edition in April 1988 before being launched as an ongoing series in October the same year, ended with issue #125 in October 1998, the last issue featuring the wedding of Captain Britain and Meggan. A four issue limited series also called Excalibur, starring Captain Britain, Meggan, the Black Knight and Psylocke followed in 2001, but a third volume in 2004-2005 had no connection to British comics or characters at all, being simply an X-Men spin-off. A variation on the original team, including Captain Britain, returned in New Excalibur, which ran from January 2006 to December 2007. There were also various Excalibur annuals and specials published in conjunction with the original series, including the graphic novel Excalibur: Weird War III. See also Captain Britain and MI-13.
Excalibur 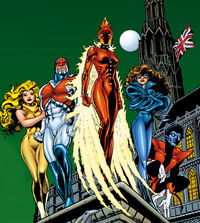 Excalibur came together shortly after the apparent deaths of the X-Men, including Captain Britain's sister, Betsy Braddock, while fighting demonic forces in Dallas, Texas. Worried about the grieving Captain Britain, his girlfriend Meggan went looking for help from Betsy's remaining former teammates, X-Men Nightcrawler and Shadowcat, who were recuperating in Scotland from injuries suffered months earlier. When another former X-Man, Phoenix, proved to be in trouble, the four united to save her, and the group then decided to stay together as Britain's newest super team. It was later revealed that they had been manipulated into forming by Roma, the Omniversal Guardian.

The team acquired more members over the years, and had several notable successes against foes including Arcade, the Technet and the Vixen, but eventually parted ways shortly after the wedding of Captain Britain and Meggan, by which time the lost X-Men had turned up alive after all. They have since reformed briefly on several occasions, with varied line-ups.

Retrieved from "https://britishcomics.fandom.com/wiki/Excalibur?oldid=142849"
Community content is available under CC-BY-SA unless otherwise noted.