Enrique Badia Romero (born 24th April 1930) is a Spanish comic artist best known in Britain for his work on the long running newspaper strip Modesty Blaise and the post-apocalyptic fantasy Axa (which also began life as a newspaper strip). He has also created a huge body of work in his native Spain since beginning his career as an apprentice to the artist Emilio Freixas at the age of 15, including the creation of the magazine ALEX and the publishing firm Ruiz Romero, and in Britain has worked for D.C. Thomson (on Supercats), Fleetway (on strips including D-Day Dawson) and more recently Rebellion (on Anderson, Psi-Division and Durham Red for 2000 AD and the Judge Dredd Megazine). He usually signs his work just "Romero", but has also used both "Badia" and "Enric Romero" in the past. He is regarded by many as one of the best strip artists of his generation, and is particularly accomplished at drawing adventure strips featuring beautiful women. 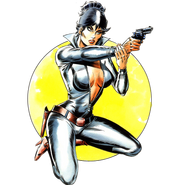 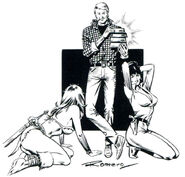 Axa, Modesty and Romero himself