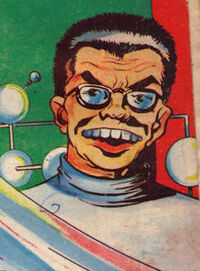 Dr. Gargunza was originally an evil scientist whose repeated plots for world domination (sometimes in partnership with his nephew Young Gargunza) were invariably thwarted by the superheroes Marvelman, Young Marvelman and Kid Marvelman. He threatened the world on many occasions during the 1950s and early 1960s before fading into obscurity... although generally, despite his reputation for unparalleled evil, he just wanted to get rich quick, despite having seemingly limitless resources with which to build weapons and rocket ships capable of interplanetary travel!

In the early 1980s, Gargunza resurfaced and much of what was previously known about him and his battles with the Marvelman family was asserted to be false. Born in Veracruz, Mexico, in 1910, Gargunza was a genius with an IQ of 190. During the Mexican revolution, he moved to Rio and was running a criminal syndicate by the age of 14. At that point, he went to Europe to study genetics and in 1934 he joined the Nazi party, but defected to England in 1941 because he predicted that Hitler would ultimately lose the war.

The British placed him in charge of the Spookshow, a covert operations group which in 1948 discovered the remains of a crashed spaceship built by the alien Qys. The ship contained a misshapen corpse which Gargunza eventually realised was actually two bodies fused into one: an original body and a cellular replicant which had shared the same mind, the creature being able to switch between bodies like a person changing a set of clothes.

Gargunza used this technology, and the discovery of the dimension called Underspace where the Qys kept their 'body wardrobes', to create Project Zarathustra, transforming kidnapped children and teenagers into super-humans to be used as weapons, and keeping them sedated while their minds were filled with implanted, wholly fictitious memories of lives as 'superheroes'. His first test subjects were Micky Moran (Marvelman), Dicky Dauntless (Young Marvelman) and Johnny Bates (Kid Marvelman). Gargunza later expanded the project by turning Terrance Rebbeck into Young Nastyman in order to give his 'heroes' a supervillain to fight, having previously programmed a parody of himself into their dream scenarios as the 'evil scientist'.

Growing in confidence, Gargunza later kidnapped a girl named Avril Lear and turned her into a female analogue of Marvelman. He kept her separate from the others, and her presence a secret from his superiors, so that he could rape the young woman as she slept.

Gargunza's project — and his abuse of Lear — came to an end when Rebbeck, rendered psychotic by his programming, awoke and escaped the Zarathustra bunker, forcing Gargunza to send his other super-humans (appropriately conditioned) out to deal with him before he caused havoc. Rebbeck apparently died fighting Lear in a volcano, but Lear herself disappeared. The government ordered the Zarathustra experiment shut down and in 1963, Gargunza used a nuclear bomb to apparently destroy the Marvelman family (though in fact, only Dauntless died).

Almost twenty years later, Gargunza realised that Moran had survived and was living a normal life in his regular human body with no idea that he could transform into Marvelman, and no memory of his past. Gargunza tracked Moran and his wife Liz down and, after almost killing Moran with his genetically engineered Marveldog, kidnapped their newborn daughter, intending to use her to secure immortality for himself. He killed Marvelman's ally Evelyn Cream, but Marvelman himself killed Gargunza, flying him into the upper atmosphere and then dropping him.

Mors of the Qys later attempted to clone a more benevolent and socially productive version of Gargunza, but without any notable success.

Retrieved from "https://britishcomics.fandom.com/wiki/Emil_Gargunza?oldid=87144"
Community content is available under CC-BY-SA unless otherwise noted.