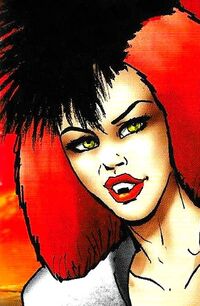 The eponymous protagonist of the 2000 AD strip Durham Red (who was also the hero of the Judge Dredd Megazine strip The Scarlet Apocrypha) was a vampiric mutant bounty hunter, or Strontium Dog. Occasionally teaming up with Johnny Alpha on missions, and also for a time with the late Frinton Fuzz, she was also known as the 'Strontium Bitch'. Durham Red was eventually placed in suspended animation for a millennium, awakening in a universe where she was worshipped as a mythical saint of mutant-kind. She is known to have lived for at least a further thousand years after this, and eventually saw the end of humanity and the rise of a new race of mutants.

The subsequent revision of Johnny Alpha's history may mean that some or all of the Durham Red stories must be considered apocryphal, or at least did not occur precisely as originally recounted.

Retrieved from "https://britishcomics.fandom.com/wiki/Durham_Red?oldid=103850"
Community content is available under CC-BY-SA unless otherwise noted.