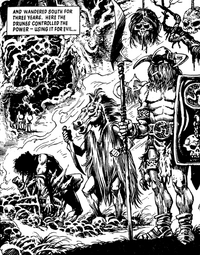 The Drune Lords are characters from the 2000 AD strip Sláine. They are a group of cultists who worship the dark gods such as Crom-Cruach and are intent on wiping out Tír na nÓg (a large part of what is now Ireland, Britain and Northern Europe). Their dark magic has already warped the land, opening portals to Hel and granting access to otherworldly menaces such as the Broch Demon. The Drunes commit a great number of slaughters and sacrifices in the name of their gods, and their rule is enforced by the barbaric Skull Swords.

The most famous of the Drune Lords was the former Horned King, the Lord Weird Slough Feg, who led the main attack against the Celtic tribes. A large number of Drunes perished during the climax of the 'Horned King' saga, many being slain in battle or being turned on by their own men after Sláine revealed that their masters intended to kill them once their usefulness was over.

Famous Drunes other than Slough Feg include Slough Throt and Slough Thruc. Female Drunes, or 'priestesses of the Badb', are called Drunesses. They include Medb, Fea the Hateful, Nemon the Venomous and Catha the Fury.

Varying degrees of magical powers, Feg being the strongest.

Despite all the get-up, most of them are still human, and still die just as easily.

One of the Drune Lords' distinguishing features is their awful smell.

Retrieved from "https://britishcomics.fandom.com/wiki/Drune_Lords?oldid=70258"
Community content is available under CC-BY-SA unless otherwise noted.