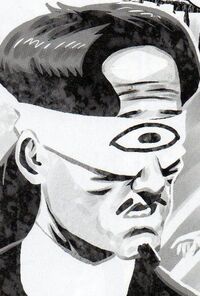 Doctor Orlando Doyle is an apparently immortal scientist, magician and necromancer and is also the Librarian of the Brotherhood of the Book. He was a sworn enemy of Captain Jack Dancer and his crew, and centuries later entered into a compact with the mysterious Victorian era crime boss Stickleback, whom he raised from the dead after five years in exchange for the thirty pieces of silver Judas took to betray Jesus. Stickleback repaid him by dragging him out of the bath and stealing his honey.

Doyle is an accomplished swordsman and surprisingly adept at unarmed combat.

Doyle has appeared in two 2000 AD series, Stickleback and The Red Seas, both written by Ian Edginton.

Retrieved from "https://britishcomics.fandom.com/wiki/Doctor_Orlando_Doyle?oldid=44834"
Community content is available under CC-BY-SA unless otherwise noted.