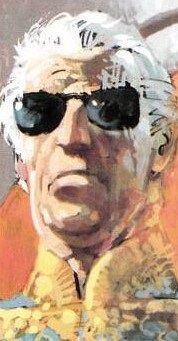 Dmitri Romanov is a character from the 2000 AD strip Nikolai Dante. He was the patriarch of the Romanov family, one of the most influential men in the 27th century interstellar Russian empire. He was also a bitter rival of Tsar Vladimir the Conqueror, who ruled the empire with an iron fist and was the lover of Dmitri's sister Jocasta until Dmitri separated them.

Ruthless and determined to usurp the Tsar, Dmitri, who believed no one but a Romanov was worthy of adding to the Romanov bloodline, artificially impregnated Jocasta and used her to breed a new dynasty: his children Valentine, Konstantin, Andreas, Viktor, Nastasia, Lulu, Arkady, Aleksandr and Aleksandra. (Aleksandr and Aleksandra were twins.)

Dmitri acquired alien technology which allowed him to bond biomechanical Weapons Crests to each of his children, giving them each a different superpower. (The twins, for example, gained the ability to merge into one super-powered hermaphroditic and annoyingly narcissistic monster.) However, the Crest intended for Arkady, the youngest, accidentally ended up bonded to Dmitri's illegitimate son Nikolai Dante, born of rape to the pirate Queen Katarina Dante. Dmitri himself, who had deliberately 'strengthened' his children by making them all hate him so much that they would kill him if they could, possessed a Weapons Crest which could override all the others.

A devious master manipulator, Dmitri plotted against the Tsar for years until finally civil war broke out between their two houses, with Nikolai Dante and the Tsar's daughter Jena Makarov caught in the middle. Dmitri apparently committed suicide on realizing that he had lost the war, but unexpectedly returned several years later. It emerged that he had survived by callously downloading his mind into the body of his son Arkady, presumably erasing Arkady's own mind in the process, and had impersonated him in order to achieve a position of power. Revealing his true identity, Dmitri seized power, deposing the Tsar and destroying Dante's Weapons Crest along the way, as well as killing several of Dante's allies. Dmitri planned to force Jena, the Tsar's heir, to marry him on the same day that he executed her father. Dante prevented this by leading a revolt against Dmitri, who was shot dead by Katarina Dante, finally revenging herself on him for what he had done to her.

The mother of Oedipus, the mythical Greek king whose name is a byword for incest, was also called Jocasta. (However, unlike Dmitri and Jocasta, when Oedipus and Jocasta had children together they didn't know that they were related.)

Retrieved from "https://britishcomics.fandom.com/wiki/Dmitri_Romanov?oldid=91498"
Community content is available under CC-BY-SA unless otherwise noted.