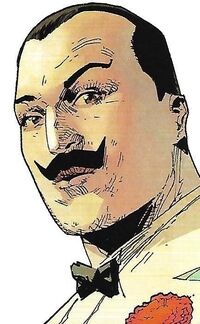 Born somewhere around 2075, the Eton-educated son of an actress and an Egyptologist, Devlin Waugh is a sadistic vampiric gay exorcist who works on a freelance basis for the Judges of Vatican City. Best described as a cross between Arnold Schwarzenegger and Noel Coward with the face of Terry Thomas, the camp vamp has had a interesting career during which he has fought everything from other vampires to a supernatural assassin, and has even teamed up with Judge Dredd... although the pair got off to a bad start during a brief encounter at customs when Devlin attempted to gain entry to Mega-City One for a cat breeders' show. Devlin will not hesitate to risk un-life and limb for the sake of the greater good, though he does insist that everything stops for tea at four o'clock. His hobbies include bodybuilding and flower arranging.

Stronger than an average human.

Used to have a problem with sunlight, before being bitten by the daywalking vampire Lilith. Still needs to drink blood daily to stop himself going on an uncontrollabe murderous rampage.