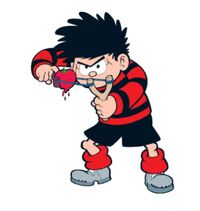 Dennis the Menace is the main character in the Beano comic and the fifth student of the seven pupils in Bash Street School's Class IA. He owns an Abyssinian Wire-Haired Tripe Hound named Gnasher and lives in Beanotown. He is almost never seen not wearing his trademark black and red striped jumper, or carrying a catapult, water pistol, or other method of causing annoyance. He often uses his pets to help him make mischief: Gnasher (the aforementioned dog), Rasher (a pig), Splasher (a fish) and Dasher (a spider). He once bought a hamster. His best friends are Curly and Pie-Face.

There have been changes to his look. Originally he was in black and white, wearing a suit and striped tie, but from fairly early on into the present day, he's been wearing his famous striped jumper. His archenemy is Walter the Softy, whom he delights in tormenting.

"Dennis the Menace - the World's Wildest Boy!" Those were the words which introduced this character to the world on 15 March 1951. He's now the longest-running character in The Beano's 70+ year history. That first strip introduced us to Dennis and his ever despairing father. Although Dennis's Dad was seen walking a dog, that dog wasn't Gnasher. He didn't appear until later.

For seventeen years, Dennis was a lonesome menace, terrorising neighbours and bullying Walter, the good boy who lived across the street. He was sometimes seen with generic friends, but they didn't have names. The first strip didn't include Dennis' famous red-and-black-striped jersey either, but this appeared within a few months. These early strips were drawn by David Law, who also created Beryl the Peril for The Topper. Dennis quickly became a readers' favourite and the first Dennis the Menace Annual (called the Dennis the Menace Book) was published in 1955 (and has been running ever since).

In late 1967, readers were introduced to Dennis's lookalike female cousin Denise, who stayed with the family for a time. As a sidekick, she was short lived. In 1968, the writers decided to give Dennis a permanent companion: a pet dog who shared Dennis' black spiky hair and had teeth like granite. Thus Gnasher was created. He debuted as a stray, who later turn out to be an Abyssinian Wire-haired Tripehound. In his first story, Dennis took Gnasher to a dog show, where Gnasher chased all the other dogs. Afterwards, Dennis's dad turned up, and ordered Gnasher to join Pup Parade, the spin-off strip featuring the pet dogs of the Bash Street Kids. Gnasher did appear there, but was quickly alongside Dennis again. Ever since, they have been inseparable. In 1970, Gnasher's name was added to the strip's title. Months later, David Law died, and David Sutherland took over artwork duties.

Having occupied the back cover since the late 60s, in 1974, Dennis finally took over the front cover as well, replacing Biffo the Bear. At the same time, he gained his own fan club, The Dennis the Menace Fan Club (incorporating Gnasher's Fang Club).

At around this time, Dennis and Walter both gained two friends. Dennis's new friends were Curly, who had appeared in the 1960s but was previously neutral, sometimes being seen being friendly with Walter; and Pie-Face, whose favourite food is obvious - pies, with any filling. The 1996 animated series revealed that his real name is Kevin, which was referenced in an issue of Beano Superstars. Walter's two new friends were Bertie Blenkinsop and Spotty Perkins, with Walter now being nicknamed the Prince of Softies.

Later, Dennis's dad's mother, referred to as Granny, would start making regular appearances. Originally, she was another authority figure of whom even Dad was scared, for she had a slipper called the Demon Whacker. In the late 1980s, with slipper punishments now outdated, she got a new personality, and bacame an OAP biker menace, in her own strip Go, Granny, Go.

In 1986, the Beano had the first of several Dennis-related publicity stunts: Gnasher ran away! He was missing for two months, during which time, Walter's pet poodle Foo-Foo took over the Gnasher's Tale page, which became Foo-Foo's Fairy Story.

When Gnasher returned, it was revealed that he was a father! He had sired six puppies, Gnipper, Gnatasha, Gnorah, Gnancy, Gnanette, and Gnaomi. The girl pups were all adopted by other people and would only ever make cameos in the Beano, although Gnatasha's new family apparently live in Beezertown, as she appeared in the Beezer and Topper in the early 1990s. Gnipper would join Gnasher in his own strip, which was renamed Gnasher and Gnipper. It was now set in the present and showed Gnasher teaching Gnipper the ways of doggy life, such chasing cats and postmen, or burying bones.

In 1993, the Beano went full colour. This saw Dennis's strip expand to three pages, vacating the back cover, while Gnasher and Gnipper was also now in colour. The Menacecar would often be used in this era.

In 1998, David Sutherland went into semi-retirement (he still draws Bash Street to this day) so Dennis was taken over by David Parkins. His first few strips were a story arc with a mystery element. Why was the spare room being decorated in softy colours? Why was Dennis's Mum ill? Why did his Dad not care if he misbehaved? The answer would eventually be revealed... Dennis's Mum was pregnant!

This revelation marks a milestone, as it was the first time a British comic had covered that subject. The result was a baby sister, eventually named Bea and always dressed in yellow and black stripes. As she turned out to be just as naughty as Dennis, although her 'pranks' were usually of the scatalogical variety, she also got her own story. Initially called Beaginnings, it was later titled Bea the Mini-Menace. Bea is short for Beatrice, a name which is just as old-fashioned as Dennis, but which also allows for a clever running gag. When Bea misbehaves, one of her parents (usually Mum) will shout "Bea! No!" — which of course spells out Beano, the name of the comic.

Although a Dennis and Gnasher cartoon series was running on CBBC at the time, Bea appeared too late to be included, as the second series in 1998 would be the last. At this time, The Beano Club launched, causing the Dennis the Menace Fan Club to fade into the background and eventually cease.

In the 21st century, Dennis has moved into a new era. With the launch of another animated series in 2009, some drastic changes were made. All the characters were redesigned — Walter, for example was no longer a softy, and instead became a cunning know-it-all who schemes to ruin Dennis's fun. Dennis uses his weapons less often, and most of his menacing now happens in the pursuit of fun, rather than maliciously. Rasher was for a time replaced by a new pig called Harley, and he and Gnipper now belong to Granny. Sgt. Slipper was slimmed down, and the Colonel lost his hat — both characters had been created for the 1996 cartoon. Several new characters were introduced — teacher Mrs Creecher, joke shop owner Mr Har-Har, rock star's daughter Athena, and Dad's boss Mr Scrimp.

Causing chaos and destruction wherever he goes.

Not to be confused with the American character of the same name.