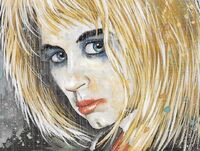 Demi Octavo is a character from the 2000 AD strip Sinister Dexter who came to the city of Downlode as a young runaway. She got a job as a courier and worked her way up until she was a professional nightclub singer and unhappily married to 'Holy Moses' Tanenbaum, the city's top mob boss. Eventually, Demi had Moses assassinated and became 'Queenpin' of the city's rackets (following a short interlude in which she went on the run from Moses' vengeful family by pretending to be a nightclub singer called Bikini Atolls, and then killed Downlode's biggest remaining mob boss, the Czar, with a gigantic reprogrammed cyborg alligator).

At Demi's side throughout her reign were her trusted gunsharks Finnigan Sinister and Ray Dexter, who divided their time between protecting Demi, rubbing out her enemies, and babysitting her little sister Billi. Sadly Demi, who was basically a decent person despite her somewhat unorthodox life choices, was eventually murdered on her wedding day on the orders of a business rival. It's tough at the top.