View source
watch 01:36
We're Getting Mutants in the MCU - The Loop
Do you like this video?
Play Sound
Death's Head 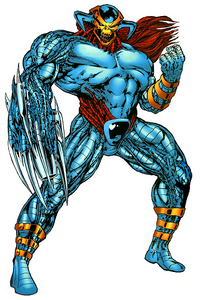 The Minion cyborg was created by Doctor Evelyn Necker of the scientific terrorist group Advanced Idea Mechanics (A.I.M) as a weapon in the year 2020 on an alternate Earth. It was sent out into the timestream to kill a number of skilled individuals and assimilate their skills and instincts into itself, but when it attempted to assimilate its 105th victim, the mechanoid bounty hunter Death's Head, his robotic nature resulted in Minion absorbing not only his instincts but effectively his entire personality. Death's Head's mind struggled for control of the Minion's body, warring with the minds of its other victims, until with the assistance of Reed Richards of the Fantastic Four, it became the dominant personality, albeit changed somewhat by being merged with all the others Minion had killed. This new individual became the new Death's Head and, freeing himself from A.I.M's control, embarked on a series of adventures throughout time and space with his new partner, the woman named Tuck. He was briefly a member of the Dark Guard.