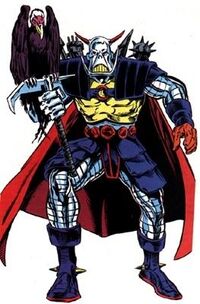 The mechanoid which would become Death's Head was created as a shell to house the mind of the techno-mage Lupex, but the woman Pyra, a rival of Lupex, thwarted his plans by giving the robot a personality of its own, that of a ruthless businessman with a dry sense of humour and no knowledge of his own origins. This new creature, Death's Head, was stolen from Pyra by an unknown party (later 'revealed' to have been the Time Lord known as The Doctor, though there is some doubt as to the truth of this), enlarged to the same gigantic proportions of the robotic lifeforms of Cybertron and sent back through time to Earth, where he attempted to take the bounty placed on the head of the Decepticon named Galvatron by Rodimus Prime.

Death's Head, who regarded himself as a "freelance peacekeeping agent" (he hated the term 'bounty hunter'), remained involved in the war between the Decepticons and the Autobots for some months before becoming lost in time again and encountering the Doctor (apparently for the first time, in the Doctor's personal timeline), who shrank him down to human size with a 'Tissue Compression Eliminator' formerly used by the rogue Time Lord called The Master. Death's Head tried to steal the Doctor's Tardis, but the Doctor thwarted him and sent him to a parallel Earth in the year 8162, where he encountered and fought the team Dragon's Claws.

Stuck in 8162, Death's Head reluctantly acquired a 'partner' in the mechanic Spratt and opened up a business office in the Los Angeles Resettlement Area. After a few months however, he was hired by Josiah W. Dogbolter to kill the Doctor, which required him to time-travel again. The Doctor once more outsmarted Death's Head and dumped him in present day New York at the headquarters of the Fantastic Four.

After a largely pointless fight, the FF's leader, Reed Richards, sent Death's Head into the future again, though rather than his own adoptive era he ended up in another possible timeline, an alternate version of 2020 where he encountered that era's version of Iron Man. Sometime after this, he ran into the Fantastic Four again in the timestream while working for the Time Variance Authority, and also clashed with the She-Hulk on present day Earth.

Shortly after this, Death's Head's origins were revealed to him when Lupex attempted to claim his body. Death's Head managed to kill his 'father', declaring that he would never be like him; Lupex murdered for fun, but Death's Head's only motive, he alleged, was profit.

Some time after this, Death's Head was hunted down and apparently killed by the cyborg known as Minion, whose programming required him to eliminate talented individuals and absorb their skills and memories. Death's Head's own artificial nature, however, allowed his personality to survive assimilation and merge with the Minion's own, freeing it from outside control and creating a new individual, Death's Head II.

Retrieved from "https://britishcomics.fandom.com/wiki/Death%27s_Head_(Original)?oldid=140341"
Community content is available under CC-BY-SA unless otherwise noted.