Start a Wiki
Dark They Were, and Golden Eyed (named after a short story by Ray Bradbury) was a science fiction bookshop and comics retailer, the largest of its kind in Europe in the 1970s. Originally based in Bedfordbury, for most of its existence it was located at 10 Berwick Street in London's Soho. Later, it moved to St. Annes Court, off Wardour Street, Soho. Owner Derek "Bram" Stokes was, along with regular customer Nick Landau, one of the major players behind the annual British Comic Art Convention (Landau and his partners at Titan Distribution later opened a rival shop, Forbidden Planet). Dark They Were... closed down in 1981. 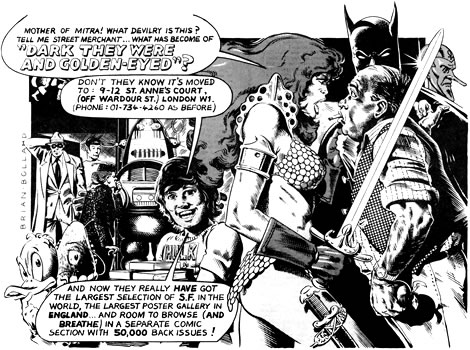