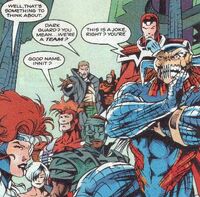 The Dark Guard were a group of heroes including Albion, Death's Head II, Motormouth, Killpower, Dark Angel, Colonel Tigon Liger and Stacy Arnheim of the Warheads, and Ultra Marine, who were called together by the Time Guardian to battle the evil of the Mys-Tech organisation throughout time and space. The circumstances in which they disbanded are unknown.

The Dark Guard starred in a four issue limited series of the same title, published by Marvel UK in 1993.

Retrieved from "https://britishcomics.fandom.com/wiki/Dark_Guard?oldid=143917"
Community content is available under CC-BY-SA unless otherwise noted.