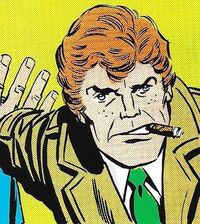 Detective Chief Inspector Dai Thomas was a Scotland Yard detective. The defining event of his life was when he and his wife, Valerie, were crushed under a falling building when the couple were visiting New York for a police conference. Dai was badly injured and Valerie was killed. Because the building's collapse had been caused by a battle between Thor and the Hulk (judging by their silhouettes), Thomas developed a hatred of superheroes, whom he saw as a serious threat to public safety.

Thomas repeatedly came into contact with the vampire hunter Blade and later developed an obsession with the superhero Captain Britain which led to a vendetta, despite the attempts of his subordinate Kate Fraser to defuse the situation. However, he did briefly team up with Captain Britain to defeat the Highwayman and the Manipulator, while insisting vehemently that he was only doing it to help the Queen.

At a later date he tried to arrest Captain Britain for brawling with Slaymaster in a comics shop, but was foiled by the fact that the superhero simply flew away. Since Captain Britain had been protecting the public from a dangerous assassin who was killing people in broad daylight, there's no way he would have been charged with an offence anyway — but Dai Thomas is nothing if not persistent.

The policeman bears the distinction of being one of the few civilians to have used sheer brainpower to deduce Captain Britain's true identity — an impressive feat which was ignored by his superiors because of shadowy interdepartmental politics. Thomas was 'promoted' to a job in Scotland where he could not longer bother his bosses with inconvenient truths. He later turned up at Captain Britain and Meggan's lighthouse on Christmas Eve and begged them for help in investigating some mysterious murders in Glasgow, which turned out to have been committed by a 'warpie' (a child given superpowers by the reality-bending effects of Jaspers' warp). Following this, the two men were reconciled and became allies (possibly bonding over the fact that they'd both had romantic relationships with women called Valerie).

Thomas was later briefly possessed by the spirit of Sir Gawain and became one of the Knights of Pendragon for a short time. He has since resumed his career in the Metropolitan Police, and is now a Commander.

Detective skills; leadership skills; keeping a cool head in a crisis; recognising when he's made a mistake and apologising.

Dai Thomas was originally created in the American Marvel title Marvel Preview #3 as a supporting character in the Blade strip in September 1975, but was incorporated into the fledgling Marvel UK universe when Captain Britain was launched in late 1976.

Retrieved from "https://britishcomics.fandom.com/wiki/Dai_Thomas?oldid=77453"
Community content is available under CC-BY-SA unless otherwise noted.