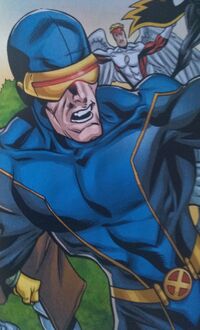 Scott 'Cyclops' Summers is a mutant, and was the first of Charles Xavier's X-Men. He has for years been romantically involved with his teammate Jean Grey, though their relationship has not always gone smoothly. He is generally regarded as a bit of a killjoy.

Due to a head injury, he can't turn his eye beams off.

The first appearance given is his first in a British comic.

Retrieved from "https://britishcomics.fandom.com/wiki/Cyclops?oldid=135401"
Community content is available under CC-BY-SA unless otherwise noted.