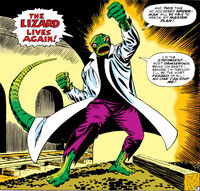 After losing his arm in battle, biochemist Curt Connors drank a serum he'd made to grow it back. Unfortunately, he became the Lizard instead! While a friend of Spidey's in human form, the Lizard would hunt him down! But, the Lizard is always changing from good and bad, so is dangerous and unpredictable. Recently, in the Clone Conspiracy event, the Jackal (Ben Reilly) brought back his deceased wife and child. During the final battle, he escaped in the shadows with his family, and left everyone else fighting. He has since turned up working at Empire State University.

Yes, don't we all have some?

Despite being an American creation, the Lizard has been drawn by British artists and used in British comic books.

Retrieved from "https://britishcomics.fandom.com/wiki/Curt_Connors?oldid=151128"
Community content is available under CC-BY-SA unless otherwise noted.