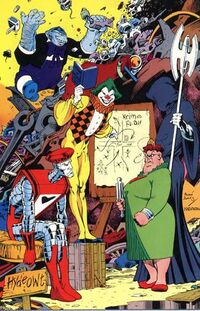 The Crazy Gang were a group of criminals modelled loosely after characters from Alice in Wonderland, who worked for the mutant Mad Jim Jaspers. The original Crazy Gang included a grossly overweight Red Queen who continually ordered "off with his head" when displeased, a Knave of Hearts, a cowled Executioner, a Harlequin, a revolting creature reminiscent of Tweedledum and Tweedledee who was eventually revealed (some years later) to be called Tweedledope, a Dormouse and two Conjurors. They were denizens of the retrograde parallel world designated Earth-238 and were presumably killed when Earth-238's entire dimension was destroyed by the Dimensional Development Court in order to stop Jaspers' madness from spreading

A duplicate Crazy Gang (though without the Dormouse or the Conjurors) was subsequently created on the Earth of the superhero Captain Britain (who had previously clashed with the originals) by his world's version of Jaspers, seemingly out of thin air (it is not clear whether the original Gang were creations of Jaspers or actual inhabitants of Earth-238 who had fallen in with the madman). This second Crazy Gang fought Captain Britain several times, including once under the direction of the assassin Slaymaster, though they were never truly evil; they simply wanted to be criminals because that's what they had been created to be.

The Knave of Hearts is strong enough to knock Captain Britain flying.

The Conjurors had 'wand guns' and the Executioner has a large axe.

The Crazy Gang were eventually incorporated into the mainstream American Marvel Comics universe, which is where Tweedledope was named and the Executioner was revealed to be a robot and subsequently destroyed.

Retrieved from "https://britishcomics.fandom.com/wiki/Crazy_Gang?oldid=94394"
Community content is available under CC-BY-SA unless otherwise noted.