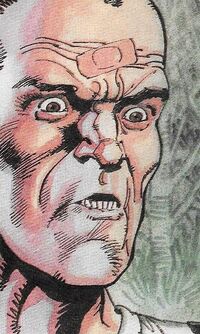 Cornelius was a thirty-seven-year-old victim of Thatcher's Britain in the early 1980s. Apparently somewhat mentally deficient, according to those who knew him he was supposedly "alright" before he lost his job as a pipe fitter eight months before the start of Skizz and was gradually ground down by the system. (At one point he was in a psychiatric hospital, classified as a "violent manic depressive.") His one constant act of defiance was an insistent declaration that "I've still got my pride."

Cornelius spent much of his time hanging out with Loz Taylor, a former workmate, and was with Loz when Roxanne O'Rourke, daughter of another former colleague, asked for his help in hiding and protecting the stranded alien named Skizz. Cornelius felt an affinity with Skizz, as he recognized another who, like himself, seemed to have no place in this world. After Skizz was kidnapped by insane government investigator Mr Van Owen Cornelius was questioned by hours for the police, but all he would say was that he had his pride, and ask them if they needed any pipefitters.

When Skizz had been detained for weeks Roxy found Cornelius in a pub, the Hare and Bucket, and asked him to help her rescue the alien. Cornelius initially refused because it might hinder his chances of getting a job, but changed his mind when Roxy told him about her fears for Skizz: "They'll break him and then they'll send him mad." It seemed to strike a chord. Cornelius helped Loz to rescue Skizz by dressing up as a laundryman and a doctor.

Mr Van Owen decided that Skizz had to be hunted down and killed. Cornelius defended him but was shot by Van Owen, his apparent death prompting his neighbours to riot and the police (whose Inspector had been at school with Cornelius) to stand by and let them. However, Cornelius had only been wounded. He recovered enough to pick Van Owen up and hurl him to his death from Spaghetti Junction just as Skizz's people arrived to take him home.

Cornelius eventually found that contact with Skizz had given him an increased lifespan, and encountered Skizz again on two further occasions years later.

Seemingly at the upper limit of human normal.

He once had a pet budgie.

Cornelius appears to have been loosely based on the character of Yosser Hughes in the classic TV drama Boys from the Black Stuff.

Retrieved from "https://britishcomics.fandom.com/wiki/Cornelius_Cardew?oldid=93277"
Community content is available under CC-BY-SA unless otherwise noted.