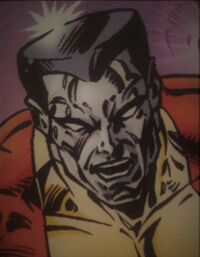 Peter Rasputin is a Russian mutant capable of turning his body into almost indestructible "organic steel". He was one of the second generation of X-Men, and has also been a member of Excalibur. He has had a lengthy on/off relationship with teammate Kitty Pryde.

Able to turn himself into living metal.

Colossus's UK-originated appearances were few and far between, and mostly confined to the titles published by Panini (such as Marvel Heroes) before Marvel stopped them from producing original Marvel material.

Colossus should not be confused with the Colossus created by Odhams in Fantastic Annual Vol 1 1.

Retrieved from "https://britishcomics.fandom.com/wiki/Colossus_(X-Men)?oldid=143007"
Community content is available under CC-BY-SA unless otherwise noted.