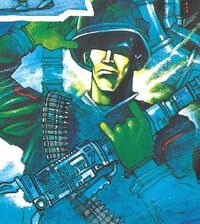 'Citi-Def' refers to the Civil Defence units in Mega-City One, groups of trained volunteers from each individual city block who are legally entitled to bear arms against attackers in defence of their blocks. Unfortunately, the often tribal nature of the city blocks has in the past led to rival Citi-Def units warring on their neighbours, most notably during the events of Block Mania (although, to be fair, they were under the influence of a psychotropic agent at the time). They are possibly the only group in Mega-City One who are more dangerous than the Judges. Judges can kill citizens if they are posing an imminent danger to someone's life; when tensions have been inflamed and a block war breaks out, Citi-Def will kill citizens if they're from the 'wrong' block.

The Judges, though seeing the necessity for Citi-Def, tend to regard them as something of a nuisance, since many of them are more than a little unhinged. There's something about insanely powerful weaponry that attracts all the wrong sorts of people.

The war between John Wayne block and Jimmy Clitheroe block in 2104 AD killed at least 201,000 people, thanks to an incident in which Citi-Def planted explosives in the basement of John Wayne. When the explosives were detonated, John Wayne block fell over and a domino effect ensued which also destroyed Jimmy Clitheroe block, Sam Snead block, Benny Hill block, Indira Ghandi block and Linda Carter block. The brief but intensely violent war between the Citi-Def units of Carol Monroe and Vince St. Clair blocks, which took place on a night in 2105 AD, cost 70,000 lives. In 2108 AD Flip Rogan Citi-Def went rogue and killed at least 800 people before they were apprehended.

Helmets and other protective gear; explosives.

Tend to stay in their own blocks.

A Citi-Def serial by Tony Lee and Jack Lawrence featured in Judge Dredd Megazine #279 to #283, though the units have primarily been used as background characters in various Judge Dredd stories — notably 'Block Mania', the precursor to the Apocalypse War.