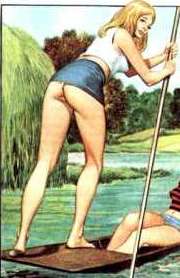 Carrie was a clumsy, accident-prone but basically good-hearted girl who had an unfortunate tendency to get herself into embarrassing situations, in which she would customarily end up accidentally stripped naked. Her cousin Connie had a similar affliction.

Carrie drove a Chevy Corvette 454, when drawn by Kingston.

Retrieved from "https://britishcomics.fandom.com/wiki/Carrie?oldid=123835"
Community content is available under CC-BY-SA unless otherwise noted.