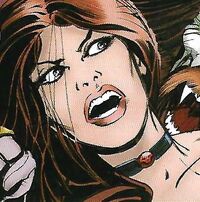 Carla is a supporting character from the Titan Comics series Captain Kronos Vampire Hunter. She was a 17th century gypsy wench arrested and placed in the stocks for dancing on the Sabbath. Understandably, when freed by the vampire hunters Captain Kronos and Professor Grost, she chose to join them in their crusade to eliminate the menace of the undead rather than remain where she was. People tend to underestimate her because she's a woman, which is frequently unfortunate for them. Professor Grost, her teacher in the art of vampire-killing, thinks that she may one day become a better vampire hunter than Kronos because she is more cunning and cautious.

Armed combat; horse-riding; knowledge of natural substances that are inimical to vampires.

She doesn't appear to have any.

Carla was based on a character in an old Hammer Horror movie, Captain Kronos Vampire Hunter.