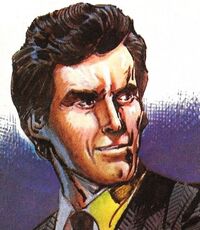 Carl Hunter is the main character in the Starlord strip Holocaust. He was a tough-talking, no-nonsense, down-to-earth former CIA agent turned private detective who accidentally stumbled into a war between humans and "extra-terrestrials systematically destroying this planet's food production." After investigating this covert war for some time at considerable personal risk, Hunter eventually discovered that the alien masterminds were telepathic rats who were afraid of fire and killed by concentrated nicotine smoke. This revelation unsurprisingly led to their swift and rather predictable defeat. Carl Hunter was last seen giving his ex-boss Colonel Minsky a kick up the bottom.

Immune to alien mind control thanks to a metal plate in his skull; immune to alien 'poison sickness'; once shot down a UFO with a single bullet.

Hunter and his story have obvious parallels with Fox Mulder of cult TV series The X-Files. However, Starlord got there first with Holocaust, and only took nine weeks to tell a story which took The X-Files nine years more than a decade later.

Retrieved from "https://britishcomics.fandom.com/wiki/Carl_Hunter?oldid=50939"
Community content is available under CC-BY-SA unless otherwise noted.