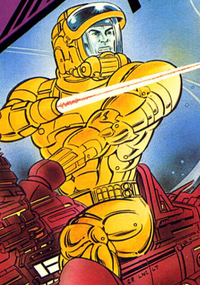 Captain Davies commanded the medical spaceship Chroma and its crew. When responding to an amber alert distress signal, Davies sent out two of his doctors to investigate: Lorna Vine and Dr. John. When exploring the two discovered that the signal was a trap set by the Lizardoreli, a species of genetic former slaves that had turned on their masters. After the two disappeared Captain Davies went to find them, only to find Dr. John dead and Dr. Vine bound and gagged by two Lizardoreli. Davies killed the two reptiles and rescued the doctor, thus saving the day from the small slaves who only wanted better treatment in life.

Is okay with slavery.

Laser-Cutter intended for performing surgery which, when turned up to full power, can act as a gun.

Retrieved from "https://britishcomics.fandom.com/wiki/Captain_Davies?oldid=81579"
Community content is available under CC-BY-SA unless otherwise noted.