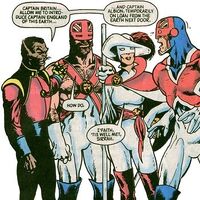 The Captain Britain Corps is an organization made up of numerous versions of the superhero Captain Britain from various alternate Earths, including Captain Britain of Earth-616, Captain UK from Earth-238, Captain England, Captain Albion, Captain Airstrip One and others. Each member of the Corps, which was apparently founded by Merlyn and his daughter Roma, is responsible for guarding their own version of Britain on their own Earth, but they have on occasion banded together to fight in a common cause. At least one member, Kaptain Briton, has fallen short of the Corps' high ideals.

All have variations on the powers of Captain Britain (Brian Braddock)

Some of them can fly.

Retrieved from "https://britishcomics.fandom.com/wiki/Captain_Britain_Corps?oldid=149964"
Community content is available under CC-BY-SA unless otherwise noted.